Chennai Petroleum Corporation Limited is very much reputed as CPCL. It is one of the Mini Ratna Category-I Company. The main products of the company are LPG, Motor Spirit, Superior Kerosene, Aviation Turbine Fuel, High-Speed Diesel, Naphtha, Bitumen, Lube Base Stocks, Paraffin Wax, Fuel Oil, Hexane and Petrochemical feedstocks. The Wax Plant at CPCL has an installed capacity of 30,000 tons per annum. CPCL also supplies LABFS to a downstream unit for manufacture of Liner Alkyl Benzene. So it has recently released announced CPCL Recruitment 2017 notifications to fill up Multiple vacant positions throughout the country in various Departments, So candidates who are looking for the Central government jobs can apply for these positions on or before the last date. As we all know there is heavy competition for the central government jobs we insist the candidates prepare well and also to apply only if they think are eligible for that particular position. CPCL Recruitment 2017 will be a golden opportunity for the job searchers as there are numerous openings in this Cental Government Organization. And Candidates can now apply for their dream job without hassle as we updated all the required additional information, especially for the candidates. So you can get all the minute details here further in this post. In this post, we updated information like Posts Details, Number of Vacancies, Age limit, Age Relaxation, Applying link, Start Date and last Date to apply etc., all about the CPCL Recruitment 2017. And candidates who are interested in state government jobs and other Central Government organizations Openings can now check them on our site ie., Sarkari Recruitment f0r more Detailed and Accurate Information. Interested job searchers can also check other Central Govt Jobs, Navratna and Maharatna Companies openings like BHEL, BEL, BPCL, OIL, SAIL, CONCOR, EIL, ONGC, NTPC, IOCL, GAIL, CIL, Vizag Steel Plant, SCI, REC, PGCIL, PFC, NLC, NMDC, NALCO, MTNL, HPCL, NBCC, AAI, BSNL, CSL, ITDC, NFL, NSC, CCL .

Chennai Petroleum Corporation Limited (CPCL), formerly known as Madras Refineries Limited (MRL) was formed as a joint venture in 1965 between the Government of India (GOI), AMOCO and National Iranian Oil Company (NIOC) having a shareholding in the ratio 74%: 13%: 13% respectively. Originally, over runCPCL Refinery was set up with an installed capacity of 2.5 Million Tonnes Per Annum (MMTPA) in a record time of 27 months at a cost of Rs. 43 crore without any time overrun. In 1985, AMOCO disinvested in favor of GOI and the shareholding percentage of GOI and NIOC stood revised at 84.62% and 15.38% respectively. Later GOI disinvested 16.92% of the paid-up capital in favor of Unit Trust of India, Mutual Funds, Insurance Companies and Banks on 19 the May 1992, thereby reducing its holding to 67.7 %. The public issue of CPCL shares at a premium of Rs. 70 (Rs. 90 to FIIs) in 1994 was oversubscribed to an extent of 38 times and added a large shareholder base. As a part of the restructuring steps taken up by the Government of India, IndianOil acquired equity from GOI in 2000-01. In July 2003, NIOC transferred their entire shareholding to Naftiran Intertrade Company Limited, an affiliate, in line with the Formation Agreement, as part of their organizational restructuring. Currently, IOC holds 51.89% while NICO holds 15.40%.

CPCL has two refineries with a combined refining capacity of 11.5 Million Tonnes Per Annum (MMTPA). The Manali Refinery has a capacity of 10.5 MMTPA and is one of the most complex refineries in India with Fuel, Lube, Wax and Petrochemical feedstocks production facilities. CPCL‘s second refinery is located at Cauvery Basin at Nagapattinam. This unit was set up in Nagapattinam with a capacity of 0.5 MMTPA in 1993 and later enhanced to 1.0 MMTPA. 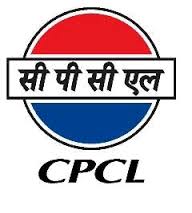 Chennai Petroleum Corporation Limited (CPCL) is going to generate a notification to recruit many vacancies. Job searchers can apply for them according to their qualification and eligibility which are updated below in this post in a detailed manner.The competitive written exam and personal interview will schedule by an authority for final selection. If any type of dispute and query arose with regard to open Chennai Petroleum Corporation Limited posts, the decision of Managing Committee of CPCL Recruitment will be last. There are many vacancies in Department of Project Director, Production Consultant, Marketing Consultant, Junior Technical Officer, Junior Marketing Officer, Office Manager, Accountant, Computer Operator, IT Professional, MTS etc..,

Interested candidates can apply for CPCL Recruitment 2017 for the following positions as per their Qualifications:

Engineer (Chemical): Degree in Engineering / Technology in Chemical / Petroleum / Petrochemicals with not
less than 60% mark in the aggregate of all Semesters / Years. SC/ST candidates need to score a minimum 55%.

Engineer (Mechanical): Degree in Engineering / Technology in Mechanical with not less than 60% mark in
the aggregate of all Semesters / Years. SC/ST candidates need to score a minimum 55%.

Engineer (Electrical):  Degree in Engineering / Technology in Electrical / Electrical & Electronics with not less
than 60% mark in the aggregate of all Semesters / Years. SC candidates need to score a minimum 55%.

Engineer (Civil):  Degree in Engineering / Technology in Civil with not less than 60% mark in the aggregate
of all Semesters / Years.

Engineer (Metallurgy): Degree in Engineering / Technology in Metallurgy with not less than 60% mark in the aggregate of all Semesters / Years.

Marketing Officer: Engineering Graduate in either Chemical or Mechanical.

Law Officer: Degree in Law (LLB or equivalent) with not less than 55% mark in an aggregate of all Semesters / Years.

Contenders can apply for the positions according to their Following Age limit given by the advertisement of CPCL Recruitment 2017:

Selected candidates for CPCL Recruitment will be paid as follows:

The selection procedure will be decided by CPCL depending upon the response received against the post. The Selection criteria can be by way of personal Interview or by way of Group Discussion followed by personal interview. The decision of CPCL will be final. E-mails will be sent to the shortlisted candidates. The final selection of the candidates will be based on the performance in the Personal Interview, where after “Offer of appointment” shall be issued

How to Apply For Chennai Petroleum Corporation Limited (CPCL) Recruitment 2017: